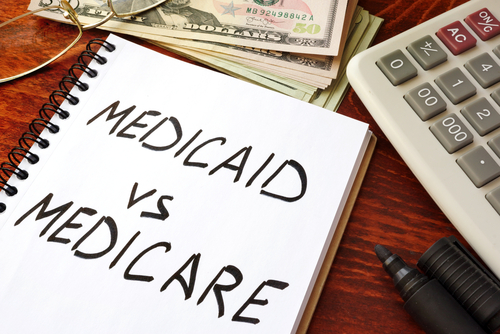 The difference between Medicare and Medicaid can be confusing for most people. I like to use the following tale of two neighbors to explain the differences to clients: The story involves Joe and Fred who live across the street from one another in the small town of Sallisaw, Oklahoma. One day Joe has a heart attack and ends up in the hospital. He is required to have heart bypass surgery. His medical bills are in excess of $50,000.00. Joe is 65 and has Medicare insurance, which everyone receives at 65 years old. He also has a Medicare supplement, which he pays for to pick up anything not paid by Medicare. Medicare and his supplement pay nearly all of Joe’s medical costs and he ends up in good shape financially. He is well and his family is happy!

A week later his neighbor Fred has a severe stroke and loses the ability to sit up, eat, and speak. He also has Medicare and a supplement. His medical costs for the initial hospital stay are covered by the insurance. However, Fred is unable to return home as he needs 24/7 care. Therefore he is discharged to a nursing home. To the surprise of his family, the nursing home tells them that Medicare doesn’t pay for long term care in the nursing home. They tell Fred’s family that they must either pay the nursing home $5,000.00 per month or qualify Fred for Medicaid. So Fred’s family goes to the Department of Human Services and applies for him to receive Medicaid. The case worker informs them that Medicaid is a need based program unlike Medicare, and that Fred can only have $2000.00 in available assets in order to receive Medicaid. Fred doesn’t have a lot but he has managed to save and acquire around $80,000.00 in assets other than his home. The DHS worker informs Fred’s family that he will have to private pay for his care until he has spent $78,000.00 of his money – (his whole life’s savings). This wipes Fred out financially. His family is very sad.